Who would have ever thought that there was still a last vestige of old guard here in a San Francisco neighborhood??  Well, there is a small neighborhood in the south eastern portion of San Francisco that still has it goin’ on!

This is my own neighborhood of Bernal Heights in San Francisco.

When we started experiencing a crime spree taking place in the form of scary and agressive armed muggings on our little streets here, we, as a neighborhood and united front, banded together and QUICK!

First there was an impromptu meeting (arranged just the night before) that took place on the steps of the BH Library and lasted for about an hour.  (i was unfortunately not in attendance of this meeting because i learned of it the following day.)

The next meeting that took place happened 3 days later at the BHCC (Martha Bros. was closed so we moved down to the BHCC).  This meeting had just under 50 people attending on a Sunday night.  This meeting was by far the most informative and helpful, but it also allowed us to plan to have another BIG meeting with our new Police Captain Tim Flavley, some of SFPD Ingleside stations finest, the Sisters of Perpetual Motion and 3 yes, count them THREE of San Francisco’s supervisors (Campos, Avalos, and Weiner).

By the time Wednesday rolled around, we were all wanting to attend this meeting.

So many Bernal Heights residents showed up, that there was reportedly 100 more turned away at the door due to being at max capacity.  There were people in the balcony, on the stairs, the patio was opened up and people went out there (could not see, but probably could hear) and people were sitting in the isles and on the floor in every crevice possible to sit.  The sups even gave up their chairs at the front looking back at the room due to the HUGE turnout.

So, in less than a week (5 days to be exact), we as a community, were able to make 3 impromptu safety meetings with the high ups at the last.

You dont see community activism and support from neighbor to neighbor like this very often.  It was just incredible to see.  And with all of the forcing out of old time residents, mostly due something called GREED carried out as Ellis Act evictions (and extremely high rents here in SF averaging on $3000 a month),  It helped to show me that there are still some parts of that old San Francisco guard that remain.  The old SF embodied in a single neighborhood here in 2013 in San Francisco.

I have needed a little recharging of my faith in what i used to know and so fell in love with here in the city.  The love and demand for diversity, the support of our neighbors and a community feeling, people not judging others by how much money they make, wether they rent or own, their ethnicity or sexual orientation, their hobbies or their age etc. People just loving that as people we can all live here together not judging each other and be very happy. We all have the same commonality… We are neighbors and we love our neighborhood.

With the economic and ethnic white washing that is happing at a rapid pace in San Francisco,  It makes me able to live in the bliss of how things used to be here for just a little bit longer.  I needed it.  I was getting so depressed and stressed out about this attitude of the new elitist influx of ignorant and selfish tech salaried crowd, coming in here and telling all of us locals that we do not deserve to be here because we can not afford it any longer.

I know as a renter that as soon as i have to move out of the place i am at now, i will be just another long term resident who has called SF home for most of their lives making the exodus to most likely Oakland or who knows where.

But for the time being i am going to thank my lucky stars and amazing neighbors of my little neighborhood called Bernal Heights, for making our neighborhood a real community… still… for a little bit longer, while we all can still be here.

(note, the meeting started 10-15 minutes after these photos were taken.  The room by the time it started… would have to be imagined to be doubled with people… packed literally to the rafters!

I am seeing this time and the unknown amount of future that lies before me as some of the last golden years i have while calling San Francisco my home.

I am really so excited that i am able to add this Bernal community and your love and regard for our neighbor/&/hood.  It is really going to be a beautiful memory for me to be able to recall when (hopefully) i grow old.

Who knows what the future has in store for the little city by the bay or me or any of you.  But lets just enjoy right now.  It is the end of an era and it is something that should be savored by every second! 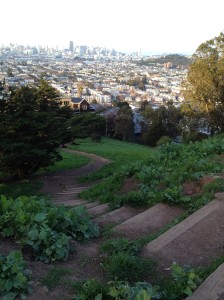 Question to readers… Do you think it is the end of an era?  What is it that you chose to savor and cherish right now??  Please comment and share in the conversation!  This is what helps it to be now!! 🙂

11 thoughts on “Bernal… The best little neighborhood in all the world!”

please join the discussion and add your thoughts! Cancel reply